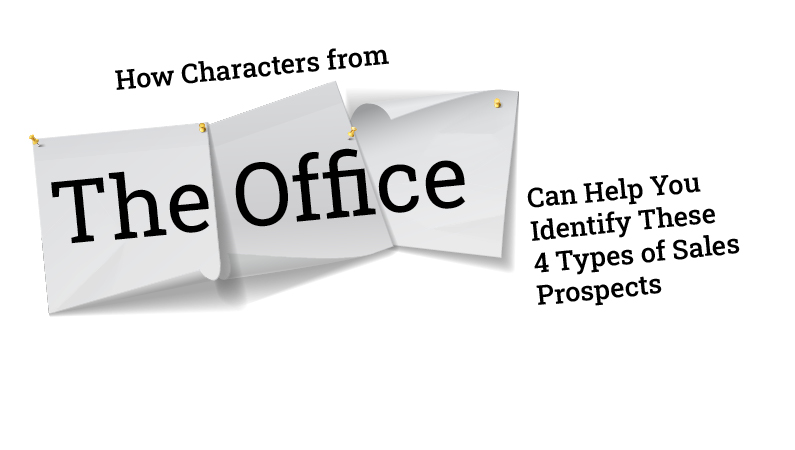 Every company you sell into is full of different types of sales prospects.

Want to move through an account faster and more confidently, no matter what you’re selling? Learn how to recognize the blockers, supporters, champions, and decision-makers by comparing them to our friends from The Office. Let’s take a trip to Scranton and visit the paper sales capital of the universe: Dunder-Mifflin. 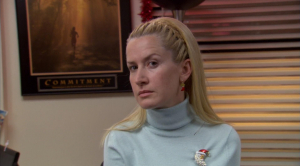 Blockers are those types of prospects who can’t be bothered to talk, commit, or support you.

They’re more than the fun police; they’re the sales police. Trying to get through to them will just waste your time. The best you can hope for is to find the next best person to talk to.

Imagine you make a call, and on the other end, you hear the voice of someone who says things like this:

Blockers are like Dwight Schrute in that speaking with them can be like talking to an argumentative brick wall – and heaven help you if your name is Jim.

Blockers can also be unmoving obstacles that view sales reps as annoyances keeping them from more important things (which, in their mind, is anything else)…kind of like Angela:

How to Get Past the Blockers:

Make it easier for them to disengage by asking them who, in their opinion, would be the best person to talk to. That’s so you can move on and find…

Supporters are prospects in an organization who are willing to talk and show some interest in who you are, what you’re selling, and how the company could benefit.

The Holly and Jim’s of the world are found across all levels of the hierarchy. They also have influence in that they can refer you to even more contacts who can move the opportunity forward, even if they themselves can’t say yes or no.

Holly, the kind-hearted, infinitely-patient HR worker who wins Michael’s heart (and inadvertently makes Kevin fall in love with her), is someone every sales rep wants to talk to. They’re positive, optimistic, and helpful.

Kevin: Yup, this is my car. Do you drive your own car?

You know who else was a great supporter? Everyone’s favorite camera-gazer, Jim. Jim is a troll, sure, especially when it comes to Dwight, but he’s also there to offer encouragement and help to Michael, Pam, Darryl, and everyone else – even Dwight. Of course, that might be the limit to how involved he’ll get, but it’s still nice.

Jim: Not as good as you.

Dwight: That’s very true. Get the hell out of here.”

How to Work With the Supporters:

Enlist their help to find contacts who they think would benefit the most from the solution, and who they think have pull with the powers that be. Also, ask if they have any supporting data that would help bolster your case. 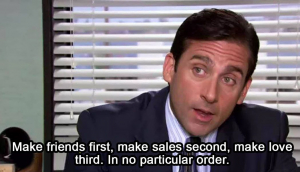 Champions are the contacts who do the most to help deals get done. They usually don’t have any final authority, but the amount of influence they have with decision-makers is enough to open doors and win over leadership.

Often, champions are those whose teams or departments would benefit most from a successful solution. They have a vested interest in seeing a good provider win, which is one reason why they’ll go to great lengths to help you reach the finish line.

Even though he was responsible for so much of the show’s awkward and inappropriate chaos, Michael Scott himself is a great example of a champion within a target account. Despite his obvious shortcomings,- Michael was always consistent with creating connections and building relationships (even to the surprise of everyone else).

He pulled off several deals that no one saw coming – like at Chili’s when Jan thought he was bombing in front of a customer, and when he stole a big customer from Staple’s in “The Convention” when everyone else thought he was too busy partying.

He also created one of the show’s most memorable moments when he surprised Pam by showing up to her art show, after everyone else made excuses to skip.

And when he sold the Michael Scott Paper Company back to Dundler-Mifflin, he turned down a lucrative buyout offer just for him and instead fought for Pam and Ryan.

Most notably, Michael was there to encourage Jim to keep pursuing Pam during the booze cruise and provided the catalyst behind the show’s defining relationship.

His brain may have gotten him into trouble, but Michael’s heart was (usually) in the right place.

How to Win the Champion:

Get their advice on which selling points you should emphasize. What do they think is most important? What do the decision-maker care the most about? 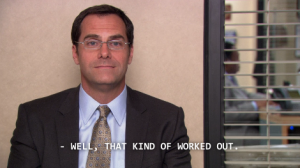 The ultimate goal, of course, is to get to the decision-makers: the undefined group of stakeholders with formal and informal authority to say yes to a deal and fund it.

DMs transcend title, role, seniority, function, and department. They can be found at any level. That’s because the typical B2B deal will require approval from 6 to 10 DMs, and that buying group will look different depending on the account.

What they usually have in common is that getting to them isn’t always easy. They also have a lot of competing priorities and not enough time to pay attention to every request that comes their way. They’re most concerned with big picture, strategic choices. And getting in contact with them usually comes from an entire network of others.

Three key DMs throughout The Office are Jan, David Wallace, and Jo Bennett. For much of the show, Jan is Michael’s direct boss (and eventual love interest). David is the next level exec who will hire Michael’s replacement on two different occasions. And Jo is the no-nonsense Texan whose company, Sabre, buys Dunder-Mifflin in Season 6.

Each DM has different priorities and needs; Jan’s main responsibility is keeping Michael from destroying the office, while David is tasked with managing not just the Scranton branch, but all other branches. For Jo, Dunder-Mifflin is just one company of several in the Sabre universe, and as such, to protect her time, she uses her underling Gabe to be a (painfully awkward) buffer between her and the office.

When interacting with a DM, a rep should be themselves, but should also tailor their approach to the specific DM to build that crucial rapport that can make the difference between a yes and a no.

Michael Scott: Yeah, when have you ever done that?

How to Convince the Decision-Maker:

The Office ran for nine seasons and left an indelible mark on pop culture. Humor aside, there are so many terrific lessons for business – especially sales – that watching it should be on the list of every enterprising rep.

Learn how to find the right people, and approach them in the right way, and you’ll be as successful in sales as The Office was in entertainment.