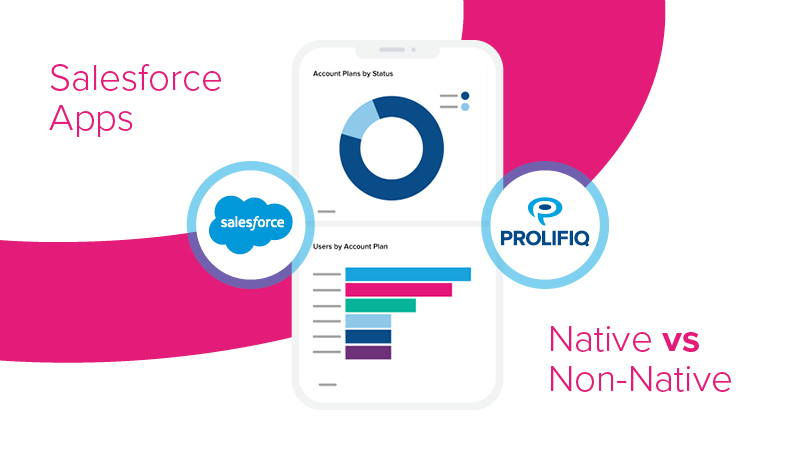 Salesforce is the industry-leading platform for sales and customer relationship management. There are almost too many reasons to list why Salesforce is awesome (besides increasing sales win rate by 26% and sales revenue by 28%, according to a Salesforce customer success survey).

Put simply, if you are in the business of winning business, Salesforce is where you want to be.

To make your job easier, the Salesforce AppExchange has thousands of options developed by third-party providers to complement Salesforce’s core capabilities. You can find a product for just about anything, but one thing you’ll notice – there’s a divide between a native Salesforce application and a non-native app.

If you’ve ever wondered how you can maximize ROI for your investment into Salesforce, then the native/non-native debate is not only highly relevant but critical.

For the most succinct definition of what native adoption means, we’ll go straight to the source – Salesforce itself:

In addition, the app uses 100% Salesforce objects (either standard or custom) and makes use of Lightning web components.

Unfortunately, plenty of apps on the Salesforce AppExchange claim to be native. But in reality, most so-called native applications are non-native apps for a variety of reasons – including one very crucial distinction.

What’s the distinction? There is a key word in the above definition that we want to draw special attention to: “integrate.” By definition, integrate means to bring from outside. Many of the apps available still have to integrate their processes and platform – and your data – into the Salesforce platform via APIs. Native solutions do not.

Put another way, your sales data lives on a database of record on a third-party server. It is brought over from that server to Salesforce. Not only that; your processes live on these third-party servers as well. When your platform crunches code to perform the operations that your sales and marketing team wants to carry out, you’re not taking advantage of the Salesforce cloud infrastructure like native apps. Instead, you’re using your own resources.

Integration pitfalls abound, ranging from a less-secure security model (you’re not covered under Salesforce’s promise of cloud security) to lower rates of Salesforce adoption. If you can avoid them, you’ll ultimately have more success with your strategies and not run into costly mistakes with non-secure or unintegrated data.

Here’s how native Salesforce software can be the solution you’re looking for.

The Main Benefits of Native Salesforce Applications Over Non-Native Apps

When choosing between native and non-native solutions, understanding what you’re trying to achieve and then viewing benefits from that perspective is imperative.

The goal of using Salesforce is to unite all of your vital sales processes so that your sales teams can understand customers, analyze accounts, plan outreach, and track progress and accountability. This goal – process unification – is just an intermediate goal. However, the one above it is maximizing deal velocity.

Deal velocity is the speed at which opportunities are identified, pursued, and closed. The higher your deal velocity, in general, the more revenue your team will generate.

So, we use Salesforce because we want best-in-class dashboards, tools, and processes to speed up the rate at which we can research, contact, and convince prospects. To accomplish this, data must be available to everyone on the sales team whenever they need it. And what better way than through a user-friendly approach that is secure, easy to understand, and efficient?

Using a native, single-platform integration over third-party integrations (and remember, when talking about true native, “integration” is inaccurate), has several key benefits that contribute to higher deal velocity.

One key feature of a native application that forms the foundation of the above benefits is having your data on an internal server versus an external server.

Best practices for security settings include keeping data internal and limiting the amount of information that has to be transmitted between integration points, such as APIs. Every API node represents a potential point of failure from a security standpoint. All things considered equal, fewer is better. It makes sense that cutting down on traditional and complicated integrations also cuts down on security risks.

But using an internal Salesforce server also cuts down on implementation and deployment time. It also gives you immediate access to core objects, custom objects, user dashboards, and more – even across multiple sales teams and divisions.

The point of all of this technology, again, is to accelerate deal velocity. For the above reasons, native software leads to a better user experience.

We want to draw particular attention to a key benefit that you don’t hear a lot about: user adoption.

Native apps decrease the risk of poor user adoption, which is important. After all, if employees aren’t using Salesforce, there’s no point in paying for it. In a study, Forrester found that “22% of all reported problems were people-related or linked to Salesforce user adoption.”

Should You Choose Native?

At the end of the day, your business model will dictate which software infrastructure you decide to use.

Truth be told, the benefits of native aren’t for everyone. But if you want to get the most of your Salesforce investment and use the platform to its utmost potential – and honestly, who doesn’t? – the advantages of native applications offer a major opportunity to do just that.

Learning to leverage native Salesforce applications to hit your goals is the next step toward getting a key competitive edge.