How Relationship Mapping Can Help You Speed Up Your Sales Cycle 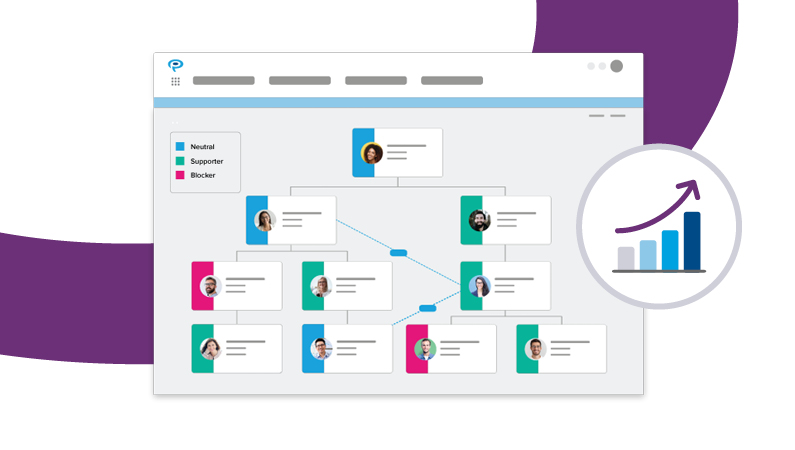 If we had to pick one metric that best tells the story of how healthy your sales process is, we’d pick sales velocity. Put simply, it is the speed at which sales cycles move from making initial contact to developing an opportunity to closing the deal.

But speeding up sales velocity – and thereby sales cycles – isn’t just adding more opportunities to the pipeline. There exists in every sales process a natural bottleneck – one that can slow the selling to a crawl or even kill it all together – the decision-maker.

Or, should we say, the decision-makers – that group of contacts in an account that all have input and veto power. CEB found that a deal takes approval from, on average, 5.4 people, before it closes. It’s not just the number of people that makes B2B selling more convoluted, as CEB reports:

“Complicating matters, the variety of jobs, functions, and geographies that these individuals represent is much wider than it used to be. Whereas an IT supplier might have once sold directly to a CIO and his or her team, today that same firm may also need buy-in from the chief marketing officer, the chief operating officer, the chief financial officer, legal counsel, procurement executives, and others.”

Sales teams that can quickly reach these key stakeholders and get them on board will either close a deal or disqualify it and move on to the next much faster than the competition.

If only it were that simple.

There are three main obstacles that sales teams have to navigate when they are dealing with decision-makers in any given opportunity:

Decision-making Groups Are More Complex Than Ever

Getting to a key buyer isn’t as easy as picking up a phone or sending off an email, especially in a key account. To navigate the intricate network of relationships in an account, you need to build trust and rapport, gather info, and move up the chain from one supporter to the other until you get to your destination.

As we shared earlier, those 5.4 decision-makers (on average) are usually in different roles across different levels. Some will be easy to reach, but most will be protected by a legion of gatekeepers and blockers.

So, you not only have to figure out who the decision-makers are; you have to also map a course to them through other people on their team.

And given that these stakeholders can be on opposite sides of the org chart, there’s a chance they may have little to no contact with each other.

Even if you can reach the stakeholders, you’ll probably find that they aren’t in lockstep about what’s most important to each business unit- at least, not yet.

In reality, they do have shared ground, but it can be difficult for them to see that. The truth is, consensus can fall apart because stakeholders either can’t agree on the right problem or identify the best solution (or both).

What’s worse is that these conflicting priorities can kill consensus before you’re involved. CEB also discovered in its study that businesses were 57% of the way through their sales process before they even spoke with a sales rep.

Supporters Are Often Hesitant to Help You

Finally, even if you establish a strong connection with a contact in the organization, and they say, “This is a great idea, I’m on board,” guess what? That support can result in zero practical help because of one human tendency: avoiding individual risk.

How often do people say they’re willing to buy, but aren’t willing to be an advocate? According to the CEB survey, 50% of the time. That’s a lot.

Being vocal can be intimidating and impractical, especially if the contact is lower on the totem pole. A supporter may not want to put themselves out there and face potential criticism. It doesn’t matter how great your solution is; if your supporters feel like they are going it alone, then they may be less likely to speak up.

And if your supporters aren’t helping you move up the chain, your sales velocity will make a sloth look fast.

The solution is to find the right people, connect supporters and stakeholders together at an earlier stage so they can build consensus, and turn conflict into collaboration. After all, it’s not about creating more external connections between the stakeholders and the sales team; it’s about creating more internal connections within an organization, with you as their guide.

To do that, you need relationship mapping.

How Relationship Mapping Overcomes the Bottleneck

Relationship mapping is the process of figuring out who’s who within an account. It’s visualizing the hierarchy of an organization and determining:

Who are the most important people in the decision-making process for your customers? What roles do they have? Who is going to support or block your solution from reaching the decision-makers? ? How do they know each other? Where are the gaps in the network? Who influences who?

Building a relationship map can bring an org chart to life and help you overcome those key challenges we just talked about.

For example, relationship maps can help you find that semi-mythical group of decision-makers that actually exists in your account. Not only that; you’ll find out how to reach each of them pretty quickly, as one conversation will lead to the next in the most efficient path forward.

By making these connections, a sales rep can start building a consensus by:

The more bonds you build in an account, the better your chances are to overcome the challenges that kill deals far too often.

You’ll also shorten your sales cycle and improve your conversion rate, which are two main ways to increase your sales velocity, according to Marketo.

By the way, relationship maps can also result in more opportunities and higher retention rates. This, in turn, pumps up revenue. Research shows that just increasing retention by 5% can result in a 50% rise in lifetime customer profits.

Fortunately, Prolifiq offers an app called – appropriately – Relationship Map. The app is built for 100% native interaction within Salesforce. You can drag and drop customer contact data into the Relationship Map software, and it’ll update the org chart dynamically with info you need about prospects, their roles, connections between each other, and their levels of influence. If you want to know more, check out Prolifiq RELATIONSHIP MAP here.

So, to sum up, increasing sales velocity means getting past the decision-maker bottleneck. This means identifying key decision-makers, connecting stakeholders to each other so you can build consensus, encourage more vocal support, and drive the conversation forward.

To do this, your team needs relationship maps and the tools to build them quickly, easily, and efficiently.